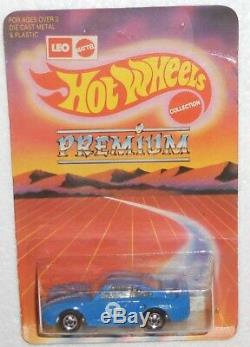 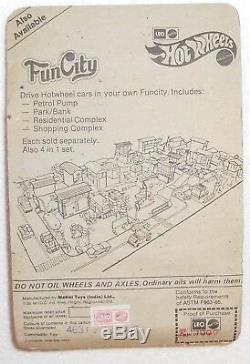 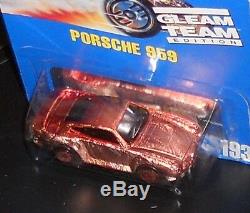 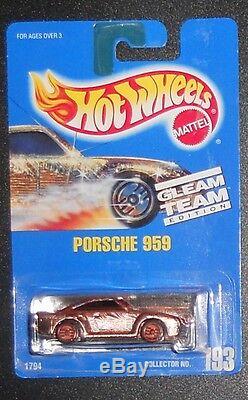 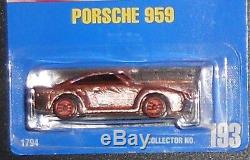 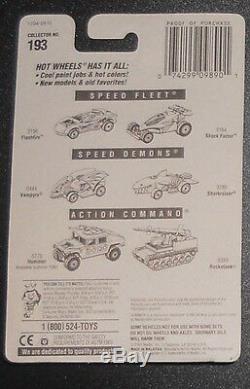 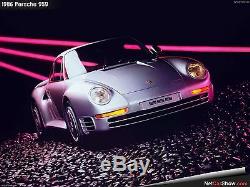 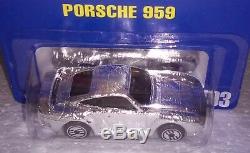 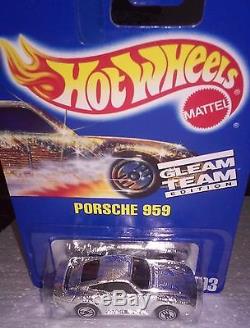 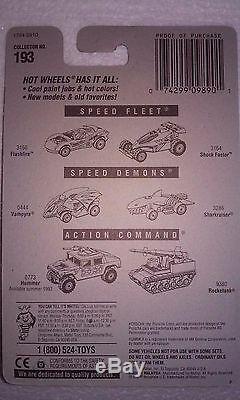 IF HUNTING FOR TREASURABLE HOT WHEELS CARS AND TRUCKS IS YOUR HOBBY, CONGRATULATIONS YOU HAVE FOUND A COUPLE EXTREMELY HARD TO FIND (XHTF)........ ON A EXCELLENT CONDITION CARDS (MOXC) PLUS ANOTHER XHTF MINT CONDITION HOT WHEELS CAR..... ON A MINT CONDITION CARD (MOMC). THE UNLOCKED TREASURE CHEST SHOWCASE. 1 - ULTRA RARE 1988 LEO PREMIUM FIRST EDITIONS - PORSCHE 959 (4631) - (MOXC). LIGHT BLUE IN COLOR WITH BLACK AND WHITE STRIPES ON THE HOOD AND TOP, "PORSCHE, " "959, " AND THE NUMBER # "7" BADGES, TAN INTERIOR, CLEAR.

THE CARD IS IN MINT CONDITION (MOMC) (AS FOUND IN STORE). PRICING INCLUDES CONSIDERATIONS FOR: THE SELLERS PERSONAL TREASURED FAVORITES. PICTURES ARE PROVIDED FOR ADDED DETAIL. AFTER PICTURES WERE TAKEN, THESE ITEMS WERE WRAPPED TO PRESERVE THEIR CURRENT CONDITION. I UTILIZE RECYCLED MATERIALS i.

BUBBLE WRAP, NEWSPAPER, SHOPPING BAGS, AND/OR BOXES TO WRAP AND PACKAGE MY ITEMS. BACKGROUND INFORMATION ON THE ORIGINAL PORSCHE 959. According to various unnamed sources. From 1986 to 1989, first as a.

And later as a legal. Regulations requiring at least 200 street legal units be built. When it was introduced, the. World's fastest street-legal production car. Boasting a top speed of 195 miles per hour (314 km/h), with the sport model capable of reaching 197 miles per hour (317 km/h).

During its production run it was hailed as the most technologically advanced road-going sports car ever built, and forerunner of all future super cars. It was one of the first high-performance vehicles with.

Providing the basis for Porsche's first all-wheel drive. When Porsche began development of the 959, it looked toward. Racing as a road-racing laboratory with which to develop technology for.

When Group B became focused on rallying events, however, Porsche felt the relevance to production cars was greatly reduced. And the goal of the 959 project shifted to frank state-of-the-art, cost-no-object technological innovation. Porsche developed an already existing engine instead of creating a new one from scratch. Engine with air-cooled cylinders and water-cooled heads, displaced 2.85 liters, about a liter less than a contemporary 911 engine. It was coupled to a unique manual gearbox offering five forward speeds plus a "G" off-road gear, as well as reverse.

The motor had originally been developed for the. " race car and then been redeveloped slightly for the short-lived Porsche Indy Car and several other projects before being "tweaked a last time for use in the 961, the 959's racing counterpart. Cylinders and sequential turbochargers allowed Porsche to extract 331 kW (444 hp) from the compact, efficient and rugged power unit. The engine was used, virtually unchanged, in the 959 road car as well. In an attempt to create a rugged, lightweight shell, Porsche adopted an.

Which were designed to increase stability, as was the automatic ride-height adjustment that became available on the street car 961 race cars had fixed. Its "zero lift" aerodynamics were a big part of keeping it driveable. The 959 also featured Porsche-Steuer Kupplung (PSK) which was at the time the most advanced all-wheel-drive system in a production car.

Capable of dynamically changing the. Distribution between the rear and front wheels in both normal and slip conditions, the PSK system gave the 959 the adaptability it needed both as a race car and as a "super" street car.

PSK could send as much as 80% of available power to the rear wheels, helping make the most of the rear-traction bias that occurs at such times. It could also vary the power bias depending on road surface and grip changes, helping maintain traction at all times. The dashboard featured gauges displaying the amount of rear differential slip as well as transmitted power to the front axle.

Wheels were unique, being hollow inside to form a sealed chamber contiguous with the tire and equipped with a built-in tire pressure monitoring system. All Porsche 959s were actually produced at. Not at Porsche, on an assembly line with Porsche inspectors overseeing the finished bodies. Most of Porsche's special order interior leather work was also done by the workers at Baur.

Was chosen for the unveiling of the Porsche Group B. Even in the closing hours of October 9, finishing touches were being applied to the car to go on display the next morning. After the first two prototypes, the. In the front and rear wheel housings, as well as intake holes behind the doors. The first prototype modified like this was code named "F3", and was destroyed in the first. The street version of the 959 debuted at the 1985 Frankfurt Motor Show as a 1986 model, but numerous issues delayed production by more than a year. The car was manufactured in two levels of trim, "Sport" and "Komfort", corresponding to the race version and the street version. Production ended in 1988 with 292 959s from the assembly line. In total, 337 cars were built, including 37 prototypes and pre-production models. At least one 959 and one 961 remain in the Porsche historic hall in Stuttgart, Germany. In 1992/1993, Porsche built eight 959s assembled from spare parts from the inventory at the manufacturing site in. All eight were "Komfort" versions: four in red and four in silver. These cars were much more expensive (DM 747,500) than the earlier ones. The later cars also featured a newly developed speed-sensitive damper system. And are today by far the most sought-after 959s.

The 959 was not street legal in the United States prior to 1999 when the. Was passed, although an unknown number were imported via the "grey market" during the late 1980s as show pieces.

During the model's development Porsche refused to provide the. United States Department of Transportation. With the four 959s they required for. And the car was never certified by the.

National Highway Traffic Safety Administration. For street use in the U.

In 2001, with the passage of "Show and Display", the crash test requirements were removed and importation of the 959 was allowed, assuming the car could meet the emissions standards applicable in 1987. The 959 can be fitted with a catalytic converter and a re-chipped computer which allows it to meet those emissions requirements. As they are pre-1996 they would not be required to pass any emissions testing anymore: due to the fact that most 959s are now over 25 years old and therefore completely legal for US importation, they are no longer required to comply with show and display laws. Most owners refuse to modify their 959s, however, and the cars remain collection pieces. Most 959s are in the hands of collectors, but a few do occasionally come to market, with prices in the region of 180,000250,000 (cars produced in 1987/1988).

This item is in the category "Toys & Hobbies\Diecast & Toy Vehicles\Cars, Trucks & Vans\Contemporary Manufacture". The seller is "unlockedtreasurechestshowcase" and is located in Aiken, South Carolina. This item can be shipped to United States.